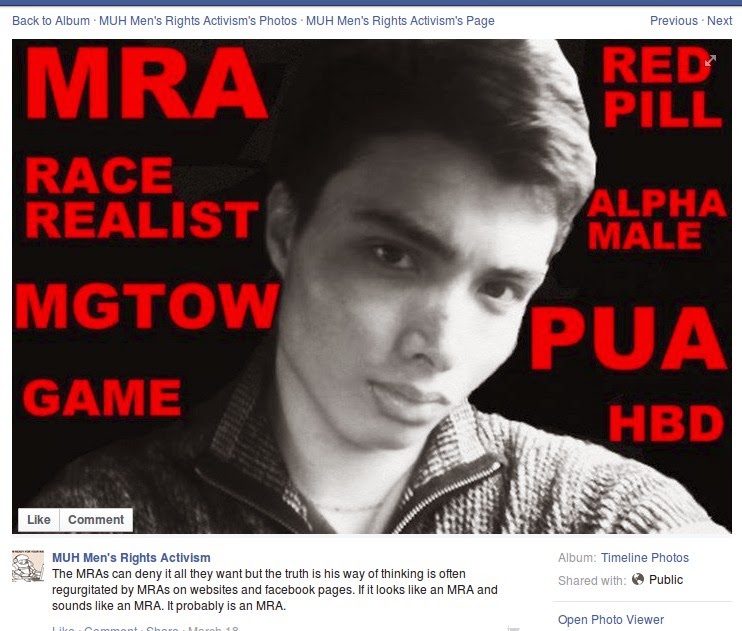 The graphic image shown here was first posted on a feminist Facebook group. The creator of the image speaks to us in the comment directly below the image, and tells us what is going on.

When I saw this, I saw a great opportunity to make a point about Pavlovian binding and how it operates, so I took the trouble to write a fairly lengthy comment myself.

When I tried to post my comment, I got a notification that the item, and the entire thread, had been removed. Nevertheless, I preserved what I had written. I expanded on that material and polished it up, and I share this now, below.


Re: the present agitprop.

The problem is that there is no such thing as "the MRAs". That is a projected, fabricated, straw-dummy category - pure and simple! "MRA" is a political fiction and nothing more.

For your propaganda to be legitimate and worth listening to, you must make it  specific. Who/what precisely are "the MRAs", and who/what precisely are we sticking that label to? What criteria would define membership in this set? What are the core items of doctrine? Is there an "MRA" charter or manifesto available? How about a link to this, so  we may confirm that you have truthfully represented these things?

Also, it would help to have a list of names, along with evidence that the actual persons in question fit all of the relevant criteria - starting with, of course, self-identification. Do any of the people whose names you might provide actually claim to be "MRAs"?

For example, is the young man depicted actually an "MRA"? Has he named himself as one? Is it possible to contact him so as to verify that? Overall, is this what an "MRA" looks like? You fail to address any of these points, and that is a fact which we cannot fail to remark.

Oh wait a minute: is that Elliot Rodger?? It sort of looks like him. Hey, you know what? If Jessica Valenti and I had been standing together on the sidewalk that day when Elliot came around the corner with his gun, he would have killed both of us deader than fucking hell.

Ahhh, death! It is an awesome force for equality, is it not?
Okay, another problem is, that the red words in the picture offer "MRA" as just one category among several. The mix is bizarrely eclectic, and it looks like the creator is a bit confused about what is what. Either that, or the creator knows perfectly well what is going on and only wishes to create confusion in others.
Overall this reminds me of the Monty Python joke about "farting in your general direction", since that pretty well describes what is being done. Nothing specific has been targeted in terms of actual persons, and nothing specific has been directed at this unspecific target. In other word, zero evidence has been given.

Gas warfare. That is what it comes to. No use in sword-fighting the fart, is there?
In sum, it is unsupported accusations against unnamed persons -- and incoherent accusations, at that. So you might as well be saying "bla-bla-bla" - it is precisely that vacuous. It has no moral or argumentative substance of any kind. But then, it isn't meant to. It is meant chiefly to arouse panic and paranoia among real, individual people who might just vaguely intersect with some part of the fuzzy set which has been constructed here.

There's a name for this, if memory serves. Don't they call it "false accusation"?

In a nutshell: Pretty much anybody who is outspokenly critical of feminism, for any reason, is targeted here.

And yes, you can keep your mouth shut if you like, but you're next in line if you decide to speak up.

The purpose of all such propaganda, and all such rhetoric, is to intimidate any critical non-feminist into shutting up about feminism. After all, feminism is a hegemonic cultural paradigm, so if you bite the power, the power must bite you back.
The creator of this graphic image is very clearly a feminist, although that person hasn't got the moral courage or frankness to admit it. I am  curious why so many feminists hate to declare their feminism. I have no problem with admitting that I am not a feminist - in fact, I will announce this fact to all the world at any time. But what's with all of the feminists who want to operate in stealth mode these days?
If feminists merely want to use Pavlovian smear tactics against people who say no to feminism, why can't they simply announce their target with the correct name: non-feminist people? At least that way, we know what the score is and where things stand.

But is it asking too much, for feminists to unfurl their banner openly, in broad daylight, and stop being crooked, shameless liars? Or is moral flatulence the "secret weapon" they hope to win the war with?

Is feminism nothing but a Monty Python joke applied in an evil, unconscionable way?

Feminism needs badly to recuperate its public image. The world isn't fooled by the lying and hating any more -- after all, we've had half a century to study this in action, and we 'd be bloody thick if we still couldn't see what feminism is, after all these years.

Posted by Fidelbogen at 4:39 AM