Feminist or Non-Feminist? No Middle Ground

We all need to make up our minds. Every last one of us. We are, all of us, either one thing or the other: feminist, or not feminist. There is no middle ground. There are no shades of gray. There are no blurred lines. There is no fence to sit upon.

You are either a feminist, or you are not a feminist. Isn't that simple?

So, what does it mean in practice, to say that you are either a feminist or not a feminist? In practice, it means that you should take one second, at the very most, to make your decision. If I were to inquire, "are you a feminist?", you would respond either yes or no . . . . in a flash!

You ought not to vacillate. If you need to pause and think about it, then you might as well just call yourself a feminist until you finally get your head straight. The force which pulls you instinctively away from feminism ought to be so powerful that it operates instantaneously. It ought to be second nature. 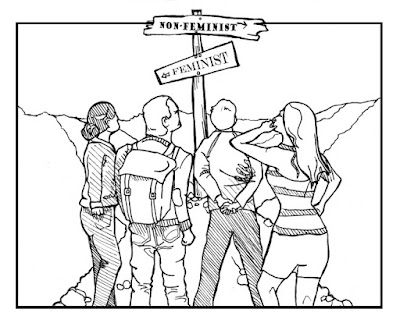 Naturally, we'd rather you were not a feminist at all, but the important thing is to make your mind up. It is not nearly so bad to be a feminist, as to be a fence-sitter.  To be a fence-sitter is to be woefully uninformed about the political situation. Your "middle ground" between feminist and non-feminist is a melting iceberg, a transitory condition that will not last.  It is an illusion, a state of existential dithering, and to occupy such a position is to be a morally two-headed creature with no stable identity -- or if you will, no GPS coordinates on the political map.

The middle ground illusion emerges from the notion that there is a "good" feminism and a "bad" feminism which can be teased apart from each other. That notion is erroneous. The truth is that if you did separate the (ideologically) good from the (ideologically) bad in feminism, you would effectively dismantle feminism altogether and it would no longer operate.

You cannot effectively discard the bad stuff in feminism, and save aside the good stuff in its own heap, and still call that heap feminism. Any so-called feminism extracted by this method would be redundant and superfluous because it would already be covered in a separately existing category -- such as, for example, "egalitarianism" or "liberal humanism." The word feminism would serve no purpose any longer.

The "good" part of feminism is not feminism's defining core. It is the insulation but not the wire. It is a fig leaf or cover story, while "bad feminism" is the real juice, the real nitty-gritty. Any effort to direct attention away from the dark side of feminism amounts to passing the buck.

I would wrap it up tersely, thuswise: Whatever is is good about feminism is not original, and whatever is original is not good.

So the illusion of middle ground between feminist and non-feminist, springs from an obfuscational distinction between "good" feminism (or feminists), and "bad" feminism (or feminists). The trajectory of counter-feminist analysis will make this obfuscation increasingly evident to the world at large, and the one correct understanding of feminism will emerge slowly into the light of public awarenness. As correct understanding emerges, the illusion of middle ground will  become unsustainable and melt away, and many an existential crisis will be had.

In the meantime, I would like to pose a series of rhetorical questions that will situate the conversation and clarify the nature of feminism in general:

Do you think it is a good idea to drive a wedge down the middle of the human race and alienate men and women from each other?

Do you think it is a good idea, to insinuate that most of the world's problems flow from a male source?

Do you think it is a good idea to encourage the growth of fatherless families?

Do you think it is a good idea to prop up your political agenda with false statistics?

Do you think it is a good idea to corrupt the criminal justice system with anti-male ideological bias?

Do you think it is a good idea to "empower" women with no clear limits and no stipulations about using that power responsibly?

Do you think it is a good idea to insult and slander women of conscience who disown feminism or say stiff things about it?

Finally, do you think it is a good idea to pretend that feminism bears no relation to any of the creepy things we have listed here?

All right. If your first impulse is to say "that's not what feminism really is!", then you had best declare yourself a feminist, and withdraw to the private enjoyment of your private understanding.

Come now, be a good gal, or a good gent, and hop down off that fence!

Are you feminist, or are you non-feminist? Please make your mind up, and please declare your standpoint frequently, in conversation, when disclosure is the appropriate thing to do.

As non-feminist men and women, the resolute nature of our opposition to feminism is the force-field which binds us together. Regrettably, we don't YET fully agree on what feminism IS. We have not YET reached target consensus. I repeat, not YET. But despite our differences, we are in FULL agreement that a show of solidarity will impress the gravitas of the occasion upon the other side. It will make them sit up a little bit straighter, and it will cause them to moderate their tone when they speak to us.

So, are you a feminist? Or are you a non-feminist? That bedrock question is where it all begins.
Posted by Fidelbogen at 2:53 AM